Virtual field trips educate young people on the history and lessons of the Holocaust and genocide, as well as broader topics of social justice and civic engagement. Pre and post-visit activity aid educators in extending students’ learning and fostering meaningful learning experiences. 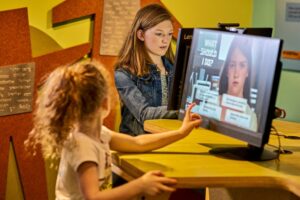 Students will build social awareness and skills to demonstrate positive decision-making and responsible behaviors, allowing for a deeper understanding of how core values of respect, compassion, and citizenship can lead to success in school and in life.

Interactive activities empower students to take a personal stand for themselves and on behalf of others. Students will be motivated to take positive action in school, at home, in their neighborhood, and around the world.

This field trip helps students in the following areas: 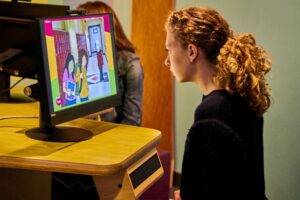 Experiential technology, online interactives, and compelling stories of Holocaust Survivors encourage to students to explore their role in empowering and creating community through the lens of universal human and civil rights. Online activities may be completed individually, as a class, or a combination of the two. Options available within the field trip allow educators to focus on specific themes, including:

Shanghai: Safe Haven During the Holocaust sheds light on a lesser-known moment in Holocaust history. European Jews who had been shut out of country after country while trying to escape Nazi persecution found a beacon of hope in an unlikely place: Shanghai, China. In 1946, American photojournalist Arthur Rothstein began a project documenting the lives of Jewish refugees who now called Shanghai’s Hongkew District “home.”

Featuring a mix of Rothstein’s photographs and personal artifacts from local Holocaust Survivors who lived in the Shanghai ghetto, students will have the opportunity to delve deeper into this lesser-known moment of Holocaust history while also examining the enormous hardship and fierce perseverance of refugees and their families as they managed to not only survive, but thrive.

This pre-recorded field trip includes a rich sensory experience of imagery, music, digital media and objects. There is an optional add-on live Q&A session with a Museum docent.

In Our Voices: Virtual Field Trip for Grades 7-12 & Undergraduates 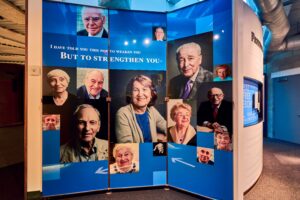 This virtual field trip is available in English or Spanish!

In Our Voices transforms history into lessons for today, inviting students to consider the power of choice, responsibility, citizenship, and human rights, with the goal of discovering what influences our decisions to act as bystanders or Upstanders.

Through guided exploration, students investigate the history of the Holocaust as told through the personal belongings, photographs, historical records, and stories of Chicagoland Survivors and eyewitnesses. Students are encouraged to use this knowledge to make connections to their world today. The field trip includes suggested pre and post-visit activities.

A new updated version will be available as of 3/3/2022! Watch the trailer here 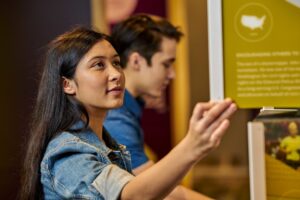 Empower students to connect with human and civil rights history and challenges today, gathering tools for civic engagement and positive action in their community and world. Explore Upstanders working to champion areas of economic opportunity, equal rights, safe communities, education and health, and the environment. Students will learn how to take action on issues that matter to them while exploring art as a form of activism, and will come away with tools and strategies to create positive change.

This field trip supports the Illinois Civics Mandates for Middle and High Schools. 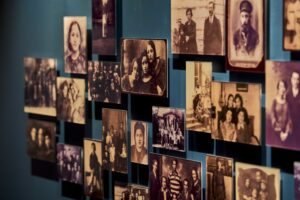 When World War II began, approximately 1.6 million Jewish children lived in Nazi-occupied Europe and the Soviet Union; by war’s end few had survived. Through the personal belongings, photographs, diaries, and eyewitness account of Survivors, explore the lives of Jewish children and adolescents – from the years leading up to the war, to the roundups and deportations, to hidden life and death in ghettos and concentration camps, and to liberation and coping following the war.

This is a live virtual experience, facilitated by a Museum docent. 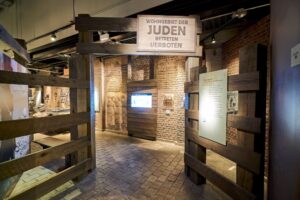 Through the personal belongings, photographs, historical records, and stories of local Survivors and eyewitnesses, explore life behind ghetto walls in occupied-Europe and the Soviet Union. Students will discover how even in the darkness of the ghettos, with the most limited resources, many Jewish people maintained their dignity, education, culture, and hope in humanity.

This is a live virtual experience, facilitated by a Museum docent.

This tour introduces students to the basic tools and techniques propagandists used in shaping their message. Through the historical lens of the Holocaust, viewed through primary sources, the tour illuminates how Nazi propaganda molded public opinion and indoctrinated German society with an ideology that fueled racism and hate; leading to the creation of government-sanctioned violence, and ultimately to the murder of an estimated 6 million Jews. 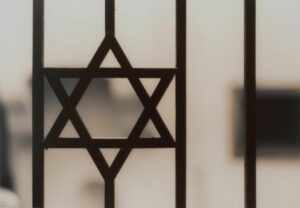 Join us as we explore the ways Jewish people maintained their humanity and dignity by using their spirituality to lift themselves above the dehumanization of the Holocaust.

This virtual thematic tour is a docent-facilitated presentation that highlights artifacts and stories from the Museum’s Karkomi Holocaust Exhibition through the lens of Jewish spiritual resistance. Hear the stories of those who found strength from their faith or drew resilience from within, to resist and combat their dire situation, risking their lives to maintain traditions, educate their children, celebrate sabbath and holidays, and sustain their inner beliefs and soul by transcending the physical in the face of Nazi tyranny.

“Spiritual Resistance During the Holocaust” tour is a project of the Illinois Holocaust Museum & Education Center and YU Torah Mitzion Kollel of Chicago. Created by Laurie Hasten and Miki Jona Schreiber.

Activated on January 20, 1944, the 23rd Headquarters Special Troops, known as the “Ghost Army,” was the first mobile, multimedia, tactical deception unit in US Army history. In essence a theater troupe on the move, the Ghost Army had one mission: produce the illusion of Allied troop movement in every place where the Allies were not. The 23rd was comprised of artists, fashion designers, illustrators, sound engineers, and other creative deceivers. Employing inflatable decoys, fake radio chatter and loudspeakers that blared sound effects, the Ghost Army could simulate a force 30 times its size as it operated as close as a quarter mile from the front lines and doing so with such success that it saved thousands of lives and helped win the war in Europe.

Now, through Illinois Holocaust Museum’s newest special exhibition Ghost Army: The Combat Con Artists of World War II, curated by the National World War II Museum, students can engage with the story of the 23rd and their role in Allied victory through testimony and featured artifacts such as artwork, uniforms, an inflatable tank, and more. Explore how the creativity, innovation, and collaboration of the 23rds more than 1,100 men deceived, sketched, and painted across Europe, coming together with diverse skills and talents for the greater good in the fight against Nazi tyranny.