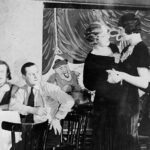 After WWII, the history of LGBTQ+ individuals impacted by the Holocaust was completely erased. In a time when LGBTQ+ history is once again being erased from textbooks and fading from public memory, shining a light on LGBTQ+ stories has taken on a renewed sense of urgency.

Join the Museum’s Director of Education, Leah Rauch (she/her), and Associate Manager of Education, Matthew Sackel (he/him), as they share little-known stories of LGBTQ+ people who perished or survived the Nazi regime and reflect on the importance of being a voice for those who were silenced.

Rauch and Sackel will explore remarkable stories of LGBTQ+ individuals who lived under Nazism, such as former Nazi party member Käthe Abels, who ran a private hospital just outside Berlin; Waltraud Hock, whose story highlights the importance of intersectionality ; Elli Smula, who was denounced for undermining the war effort due to her sexuality; Gad Beck, who masqueraded as a Hitler Youth member; Frieda Belifante, renown cellist who hid in the open as a man; and Rudolf Bradza, the last known camp Survivor deported by Nazi Germany on charges of homosexuality.

Free to the public