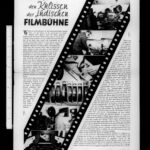 In the flurry of anti-Jewish legislation following the Kristallnacht Pogrom in November 1938, Jews were completely banned from attending the cinema. The Jewish Cultural League in Berlin, created by and for Jews soon after the Nazis came to power in 1933, decided to open a movie theater and provide Jews an opportunity to watch primarily German and American movies in a communal space. The cinema was popular and well attended until it was forced to close in the fall of 1941, as the Nazi regime prepared to begin deportations of Jews from the Reich. In this workshop, educators will learn about the history of the organization and look closely at a few of the American films shown, while considering why the Nazi regime allowed it to exist and why Jewish audiences would want to attend. Through the analysis of primary source documents, including private letters and newspaper articles, educators will be given a unique way to guide students through select aspects of life under Nazism for the German Jewish community during the critical time period between Kristallnacht and deportations.