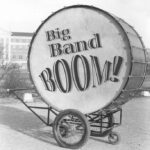 Celebrate the end of WWII with a classic USO tribute featuring a live musical performance by Chicago’s Big Band Boom! Lindy hop and jitterbug the night away with “String of Pearls” and “Sing, Sing, Sing,” Take the A Train” and other musical gems from a bygone era.