“Playing Anne Frank”: A Conversation with The Forward’s  Adam Langer 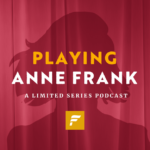 For millions of people, seeing a performance of “The Diary of Anne Frank” (or the 1959 film) has been an unforgettable experience that introduced them to the story of the Holocaust. It continues to be one of the most-performed plays in the United States today.

Join us to hear reflections about this lasting legacy from award-winning journalist, Executive Editor of the Forward, and author Adam Langer, who has delved deeply into “The Diary of Anne Frank” through two creative projects. In Playing Anne Frank, a new documentary podcast released this past January from the Forward, Adam shares the largely untold history of the beloved stage adaptation of the Diary and how it changed the lives of the actors and artists who helped to create it. Adam’s latest novel, Cyclorama, details how a 1980s suburban Chicago high school production of “The Diary of Anne Frank” deeply impacted the lives of its young actors. Chris Jones, chief theater critic for the Chicago Tribune, will moderate the conversation with Adam about the legacy of Anne Frank and the artistic works that her diary has inspired.