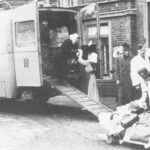 Systematic killings by the Nazi regime began in the fall of 1939. These first victims were Germans, both Jewish and non-Jewish, with physical and intellectual disabilities. Beginning with the murder of children, followed by adults, and eventually those imprisoned in the concentration camp system, the T4 program was a direct predecessor to the so-called “Final Solution.” The details of Operation T4 became known to the public, most famously through the sermons of the Bishop of Münster, Clemens August Graf von Galen, in the summer of 1941. Public outrage resulted in the ceasing of systematic gassings in centralized locations, illustrating the power of the German people and public opinion in opposition to the Nazi regime. The killings continued out of the public eye, moving to decentralized locations in clinics and hospitals with the use of lethal injections and starvation. It is estimated that approximately 250,000 people were murdered. Through the analysis of primary source documents and Survivor testimony, educators will learn about the history and progression of Operation T4, and the consequences and implications of public opposition to the program.