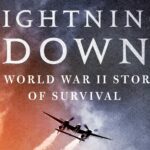 Join us in discussion with #1 New York Times bestselling author Tom Clavin as he makes his literary return to the aerial battlefields of WWII to tell a harrowing and unforgettable story of heroism and human endurance in his latest book, Lightning Down: A World War II Story of Survival.

Based on a true and largely untold story, Lightning Down is an inspiring saga of American WWII fighter pilot Joe Moser who endured unspeakable horrors when his plane was shot down over Nazi-occupied France. Captured immediately, Moser’s journey into hell began  with  imprisonment in Buchenwald concentration camp. Only a desperate plan would save him and his courageous comrades.

Reserve my spot
Purchase the book