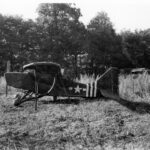 During World War II, the Ghost Army, formally known as the U.S. Army’s Twenty Third Headquarters Special Troops, used disguise, sound, and radio deception to mislead the Germans about the location, strength, and movements of U.S. Army units. These tactical successes were a critical part of a vast inter-Allied deception effort that stretched from the front lines to high-level military headquarters to the halls of spy agencies in London. Overall, these deceptions consistently left the Germans befuddled about Allied strategy, intentions, and operations.

From rubber tanks to double agents, learn about techniques used by the Ghost Army and deceptive tactics today with Dr. Mark Stout, former intelligence officer and Director of Global Securities Studies for John Hopkins University. Dr. Stout will showcase tools of the craft throughout military history and demonstrate how the Ghost Army’s plans helped Allied commanders while avoiding confusion with “real” (non-deception) plans.