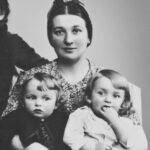 Orphaned and torn apart at the age of 3, twins Adam and Ida Paluch survived the Holocaust without knowing what had happened to each other. Adam endured life in a concentration camp and was later adopted. Ida evaded capture as a hidden child in Nazi-occupied-Poland. Both children were baptized, issued fake birth certificates with new names, and raised Catholic, but never forgot each other. Join us for the Midwest premiere of Adam & Ida, a remarkable film detailing two Survivors’ lifelong quest for belonging – a story told through interviews and stunning animations illustrating the lives and memories.

Film screening and Q&A with star and Museum Board Member Ida Kersz.

Reservations required. Free to the public.