Virtual Lunch & Learn: My Family’s History: Jewish Victims and Fighters During the Holocaust in the East 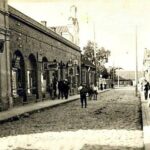 Spurred by a lack of knowledge about his grandparents, who emigrated as children from Latvia and Belarus, Eric Benjaminson uncovered several fascinating and tragic histories from family members including: a relative who was a pharmacist and befriended a German naval officer who unsuccessfully tried to save her from the massacres in Liepaja, Latvia; relatives from a smaller town in Latvia who were murdered; and a great-uncle who participated in the revolt in the Jewish ghetto in Lahva, Belarus, joined a Soviet partisan unit, and then served in the Red Army until he was killed in combat in February 1945.

Benjaminson will share these stories in a virtual presentation on the lives and fates of Jews in the USSR during World War II – including his findings from decades of research of family history uncovered from behind the former Iron Curtain.