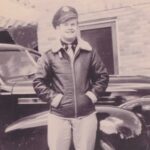 Reserve my spot Purchase the book

Chicago’s James “Bud” Wilschke was just 23 years old when he was shot down over coastal France in 1943. Struggling with his parachute, Wilschke and his fellow airman Robert Neil jumped out of desperation, not knowing they would land directly into Nazi-occupied France.

After landing safely, he woke up to a farmer pointing a shotgun at him and asking in French if he was American or German. Wilschke replied, “I’m American,” thus beginning a six-month fight behind enemy lines for survival, hiding out in attics, barns, and hay wagons. With help from a network of French citizens, while traveling across the country and over the Pyrenees Mountain range, Wilschke and Neil made it to freedom.

After the war, Wilschke built his own family, but never mentioned the ordeal to anyone. His story went untold until Wilschke’s niece, Barbara, and her husband, Jim, found a box that documented the ordeal.

Join us for a virtual conversation with Barbara and Jim Wojcik as they discuss their latest book, details about what they found in the hidden box, and how Wilschke survived.