Virtual Book & Author: “By the Grace of the Game: The Holocaust, a Basketball Legacy, and an Unprecedented American Dream” 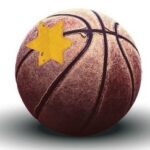 Reserve My Spot Purchase the book

Join us for a live virtual discussion with Dan Grunfeld, former two-time Academic All American as a member of Stanford University’s men’s basketball team and 8-year professional basketball player, as he presents his debut novel, By the Grace of the Game: The Holocaust, a Basketball Legacy, and an Unprecedented American Dream.

The novel shares the story of his grandmother, Anyu, who overcame countless obstacles to raise her son, Ernie, in New York City after losing seven members of her immediate family in the Holocaust. By the Grace of the Game also highlights how Ernie fell in love with basketball, later becoming an Olympian, president and general manager of the New York Knicks, and the only NBA player in history with parents who survived the Holocaust.