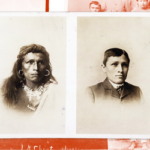 Between 1869 and the 1960s, hundreds of thousands of Native American children were forcibly abducted from their homes and families and placed in more than 350 government-funded, and often church-run, Indian Boarding schools. These children were subjected to horrendous conditions, suffering physical, sexual, cultural, and spiritual abuse and torture.

They were banned from speaking their Native languages, from traditional and cultural practices, and stripped of traditional clothing, hair, and personal belongings. The express intent was to implement cultural genocide through removal and “reprogramming” Native children to carry out systematic destruction of Native cultures and communities. Many of these children never returned home, and their fates have yet to be accounted for by the U.S. government.

Join us for a poignant conversation with Dr. Samuel Torres, Deputy Chief Executive Officer for the National Native American Boarding School Healing Coalition (NABS), as he highlights and addresses the history and ongoing trauma created by the U.S. Indian Boarding School Policy.

Torres is expected to be accompanied by a boarding school survivor. There will be opportunities for questions after the discussion.