In Search of a Jewish Story in China 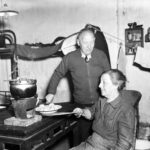 The “Jewish story” is traditionally considered to be an “endless chain of persecutions, from century to century, from country to country.” However, the history of Jews in China is divided into two unique narratives: Jews in China and Jews of China.

Join historian and art & travel writer Irene Shaland as she takes us on a fascinating expedition through 2,000 years of history to explain why the Jewish population in China nearly disappeared and the ways in which their experiences overlap with those of Jews in Europe and America. Shaland will also impart lessons from the history of Chinese Jews and provide context for how the Japanese-occupied port city of Shanghai became a safe haven for thousands of European Jews during World War II.

***Masks are required and social distancing guidelines will be encouraged at the on-site program.***