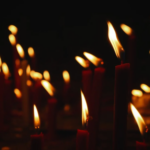 In honor of International Holocaust Remembrance Day, gather with us on-site at the Museum for a live opera performance of the first act of Two Remain: Out of Darkness, in partnership with Chicago College of Performing Arts, Roosevelt University.

Her Jewish identity hidden, Krystyna Zywulska was a political prisoner at Auschwitz-Birkenau. In secret, she composed lyrics to inspire fellow prisoners, even as she carried out her harrowing job in the Effektenkammer (storage room) cataloging the personal effects of thousands of prisoners before they were murdered in the gas chambers next door. Many years after the war, a journalist asks Krystyana to share her stories, hoping to record them on a tape player. Haunted and helped by the ghosts of her past— Zosia, Edka, Mariola and her younger self, Krysia — she struggles to find the words.

Join us for this unique and compelling commemorative performance that will exhibit the power of art to uplift the heart and cradle of the soul, and the strength found in the fight for survival.

This opera is a commission from Music of Remembrance.