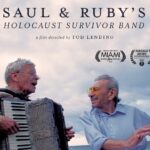 In honor of International Holocaust Remembrance Day, gather with us virtually for a Q&A session with the cast and filmmaker of Saul & Ruby’s Holocaust Survivor Band.

This unique and compelling story is about having the courage to live one’s dreams, finding purpose and meaning in life at any age, the transcendent power of music, and the importance of speaking out against antisemitism and bigotry.

Like many Holocaust Survivors, after World War II, Saul and Ruby moved to America, started families and careers, grew old, and retired to South Florida. For them, retirement could have been the last chapter in their story. But then they decided to start a klezmer band: the Holocaust Survivor Band. The band summons the bittersweet memories of childhood in Poland, but more than that, it is a celebration of life.

The band’s history begins in total obscurity, playing in residential homes for the elderly and small Jewish community organizations, and builds up into being invited to perform at venues across the country, including a coveted performance at the Kennedy Center’s Millennium Stage.

We invite you to stream the film before the program, then join us with Saul Dreier and Ruby Sosnowicz (the film’s subjects) for a discussion moderated by Academy Award-nominated and Emmy-winning filmmaker, Tod Lending. Lending’s work has aired nationally on ABC, CBS, NBC, PBS, HBO; has been screened theatrically and awarded at national and international festivals; and has been televised internationally in Europe and Asia.

Registrants will receive a link to view the film in advance of the program. The film will be available for streaming until 24 hours after the program.

Free to the public