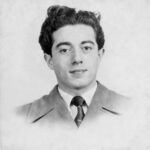 A true “rags to riches” story, Unstoppable: Siggi B. Wilzig’s Astonishing Journey from Auschwitz Survivor and Penniless Immigrant to Wall Street Legend by Joshua M. Greene is a compelling, well-researched biography of Auschwitz Survivor Siggi Wilzig. We invite you to join us in conversation with Greene as he discusses Unstoppable and Wilzig’s ongoing legacy.

During the Holocaust, 59 members of Wilzig’s family were killed, including his parents and all but one of his siblings. When he arrived in the U.S. at 21 years old in 1947, he vowed three things: to never go hungry again, to support Jewish people, and to speak out against injustice. With $240 to his name, Wilzig managed to build a fortune in both the oil and banking industries that were worth about $4 billion at the time of his death. Throughout his life, he remained committed to confronting antisemites, and was one of the driving forces behind the establishment of the United States Holocaust Museum.