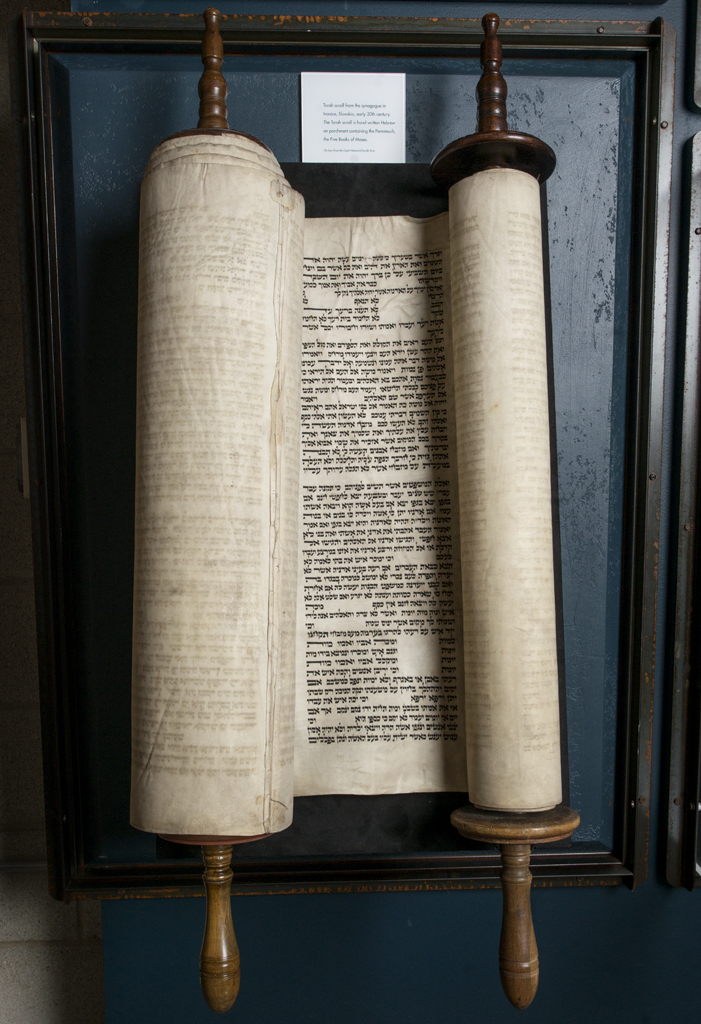 Early 20th century Torah Scroll. This Torah Scroll was taken by the Nazis from the synagogue in Ivancice, Czechoslovakia. It was recovered with thousands of other Czech scrolls in 1964 by the Westminster Synagogue.

Ivancice is a small town in South Moravia, a region now part of the Czech Republic. Some records show that the first Jewish synagogue was built there in 956, but documentary evidence of Jewish settlement can be traced to 1490.

When the Munich agreement was signed in 1938, Britain and France agreed to Hitler’s demands to annex the German-speaking border regions of Czechoslovakia, known as the Sudetenland. The Jewish populations in these regions were only given a few days to flee to the interior of the country. Such waves of Jewish refugees resulted in the opening of refugee camps, one of which was in Ivancice.

In the remainder of Czechoslovakia, synagogues and Jewish congregations were safe for a short period.  Fearful of further Nazi destruction of Jewish cultural and religious heritage, a group of Jews in Prague submitted a request to the Nazis to save the various Jewish artifacts that remained by bringing them to the Jewish museum in Prague. Nazi authorities agreed, and countless artifacts, including dozens of Torah Scrolls, liturgical treasures, ritual textiles, and books, were saved and sent to Prague.

In 1942 the Jews from Ivancice were deported to death camps. The Jews of Prague would soon follow as they would be deported a year later, in 1943. Even after the defeat of Nazi Germany, the newly independent Czechoslovakia remained a country largely without Jews. The city of Prague, which once had a Jewish population of 54,000 in 1940, was decimated down to less than 8,000 by 1947.

On a visit to Prague in 1963, American art dealer, Eric Estorick, was approached by Czech officials who asked if he would be interested in buying Torah Scrolls. Estorick, along with the help of Rabbi Harold Reinhart and Hebrews Studies Professor Chimen Abramsky, would negotiate a deal with Czech authorities that would bring 1,564 Torah Scrolls to the Westminster Synagogue of London in 1964. After finally recovering the Scrolls and tirelessly examining and cataloging them, the scrolls were finally ready to be redistributed back into Jewish congregations across the globe. The Memorial Scrolls Trust was established to help with this project.