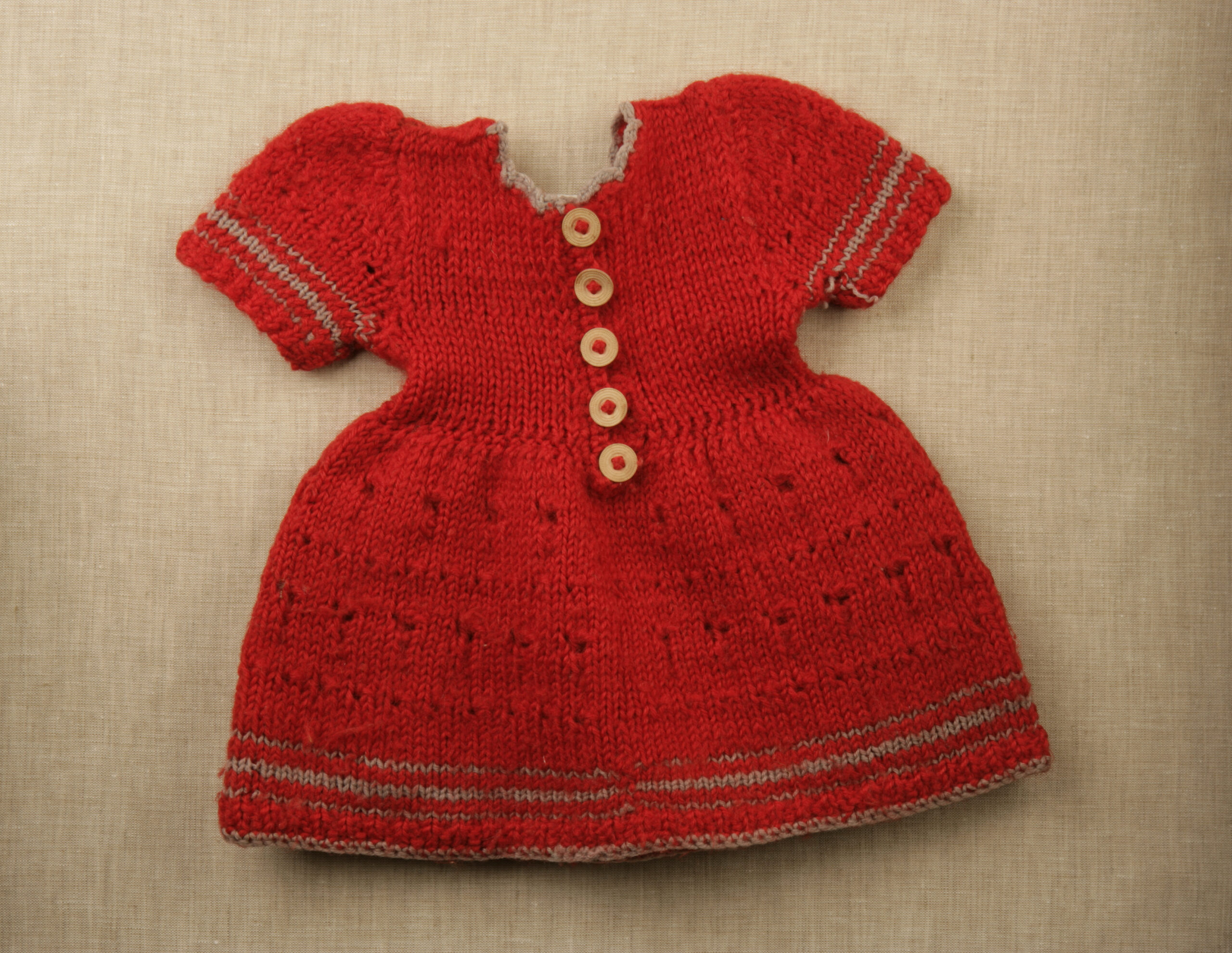 Red child’s dress knitted of red yarn with grey edging and details, made by Martha Frankenstein, c. 1941. The dress was made for Martha’s granddaughter, Judith Kolb when she was a child, living in Shanghai, China.

Judith (Daisy Fleischer) Kolb was born on March 6, 1940, in Shanghai, China. Judith’s family had previously resided in Germany, where they ran a fabric shop in Swinemunde. After Kristallnacht, her grandfather, Julius, was arrested. Her grandmother, Martha, obtained exit papers from the mayor’s office, showed them to the Gestapo, and asked them to release her husband so they could leave the country. After he was released, Martha sold the fabric shop’s stock and equipment to fund their escape to Shanghai.

In Shanghai, Judith’s father, Leopold, officiated as a Cantor and taught in Torah schools, and Judith’s grandparents ran a transportation company. Judith’s brother, Heinz, opened a small café and later established a bakery business. Her father taught her Hebrew, and when she was six, she began studying English at the Kadoorie School. The entire family resided on Ward Road but then moved to the Hongkew District, an area that housed many Jewish refugees from Europe.

In July of 1942, the chief representative of the Nazi Gestapo to Japan, Colonel Josef Meisinger, put forward the plan “Final Solution in Shanghai, to Japanese authorities who were occupying China.” The Japanese refused this plan. However, a year later, the Japanese ordered “The Designated Area for Stateless Refugees,” ordering Jewish refugees to move into the Hongkew Ghetto.

In 1945, an American aircraft accidentally bombed the Hongkew Ghetto. Over 30 refugees were killed, and more than 250 were injured. However, Judith and her family survived.

Soon after the end of WWII, many Jews made plans to leave Shanghai. In 1948, Judith and her family set out for San Francisco. The journey took four weeks and involved stops in Hong Kong, Manila, and Honolulu. During the journey, the family also had to endure the crowded conditions of the SS Marine Adder. After finally arriving in San Francisco, the family stayed in a hotel but eventually settled into a home at 568 29th avenue.

Judith’s father continued officiating as a Cantor and provided private Bar Mitzvah lessons to the Jewish community in San Francisco. Judith’s grandparents and mother also found work sewing in Levi Strauss factories. In August of 1955, Judith, her parents, younger brother, and grandparents left San Francisco when her father was hired as cantor at Congregation Habonim in Chicago, Illinois.