In the Act of Art Gallery at Illinois Holocaust Museum, the works explore genocides and human rights atrocities from the artists’ perspectives. Artists express themselves through artistic mediums, such as paintings, photography, sculpture, spoken word, poetry, etc., and become an Upstander through their form of expression.

We are highlighting different forms of art that is in response to the Holocaust, genocide and human rights. Please take a look at our newest online resources that correspond to the certain pieces of artwork and the exhibition, They Shall Be Counted: The Theresienstadt Ghetto Art. Each piece contains reflection questions and interactive activities that will turn budding artists into activists!

ART IN RESPONSE TO THE HOLOCAUST

A Polish Catholic survivor of the first transport to Auschwitz in 1940, Szajna became one of post-war Poland’s most prominent cultural figures. His art developed from his career as a director and set designer for theater and often included surreal explorations of the human condition. The motifs in The Ant Colony first appeared in Szajna’s work as part of a set design in 1969. Over several decades, he created the series based on his experience of a concentration camp roll-call; the frightening reality of a faceless individual lost in the swirl of a powerful mass.

Lasansky began confronting the brutality of Nazi Germany with his landmark work The Nazi Drawings in 1968. Ten years later, as a response, he completed the Kaddish series, named after the Jewish mourner’s prayer. Several motifs are repeated in the series: a figure at the bottom of each print-perpetrators, victims, and survivors-and a dove of peace above; stenciled numbers always beginning with the number six-symbolic of the millions killed and of tattooed victims; masks; and hands in various positions.

Cole created Stowage by embedding a metal ironing board and bases of twelve irons into a sheet of plywood.  He inked the surface and then applied paper to create the print.  At the center of the work, the perforated ironing board evokes illustrations of how African slaves were shipped as human cargo in vessels bound for the Americas.  Surrounding the board, the iron bases suggest facial scarification markings of African tribes, traditional masks, or a close-up view of the way in which slaves could be laid into a ship.  The pattern of the plywood simulates the ripples of the ocean.

Cole believes that “when one culture is dominated by another culture, the energy, or powers, or gods of the previous culture hide in vehicles in the new culture.”  In Stowage, African spirituality inhabits the domestic tools used by slaves and their descendants in the Americas.

Portraits II was made in response to the hundreds who disappeared under the Uruguayan dictatorship (1973-1985). Tiscornia took picture frames and turned them backwards to hide what one expects to see most-the images of those included in the photographs. Tiscornia has stated, “I tried to create a visual metaphor for the impotence that disappearance imposes on us, at the same time I wanted to create a poetic construction as a tribute to those that lost their lives.” The included texts are from Holocaust Survivors and others who lived through traumatic events such as the dictatorship in Chile.

THE RIVER IN RWANDA

KebedechTekleab spent ten years in a Somali prison camp, during the lengthy war between Somalia and her native country, Ethiopia. Immigrating to the US, she resumed her art studies, initially focusing on works that explored the vast losses that violence has inflicted on Africa. The River in Rwanda reflects the terrible reality of mass suffering. The river is teeming with bodies, entwined with one another. No longer recognizable as individuals, we see them as a mass disappearing into the landscape.

THE ART OF COOKING AS RESISTANCE

Cooking and baking are considered  “culinary arts”. Many Jewish traditions include special foods and meals. Recipes are often handed down generation to generation. During the Holocaust, people would talk about the recipes and food they loved before the War. They could not cook those recipes, but they could try to preserve their culture with recipes. Controlling food is a means of exerting power over people, and the Nazis took the food away. In an act of resistance, these recipes were written down by the men and women in the concentration camps

THEY SHALL BE COUNTED: THE THERESIENSTADT GHETTO ART OF ERICH LICHTBLAU-LESKLY 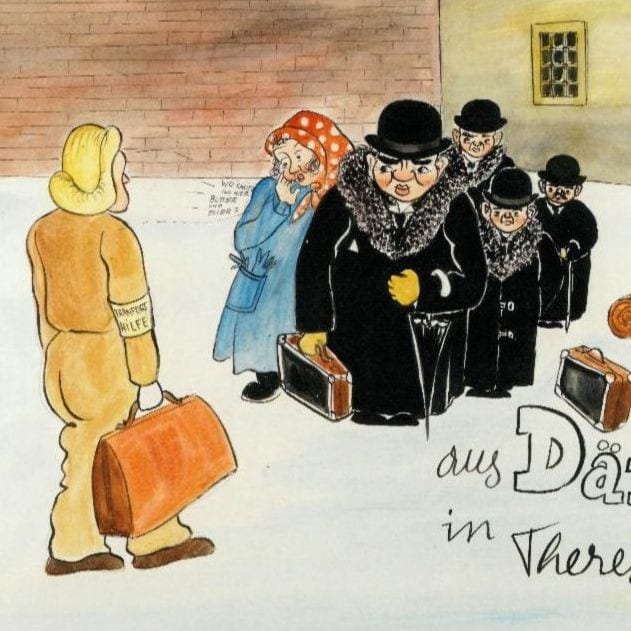 They Shall Be Counted is a gallery of original paintings and drawings by Erich Lichtblau-Leskly. While imprisoned in Theresienstadt (Terezin) Ghetto, he artistically depicted the daily lives of its residents, poignantly capturing the complications and ironies of ghetto life.

In the spring of 1945, Lichtblau-Leskly cut most of his artwork into pieces. His wife, Elsa Lichtblau, hid the fragmented artwork under the floorboards of the barracks, and Lichtblau-Leskly was able to retrieve it after liberation. While living in Israel during the 1950s and 1960s, he reworked these fragments into larger watercolor illustrations. Both original sketches and reworked illustrations will be on display in the collection.

Although the Museum is closed for now, we invite you to visit our Virtual Museum and connect with us online! We have a wide range of virtual programs and tours available.
Click here for more information