Shanghai: Safe Haven During the Holocaust 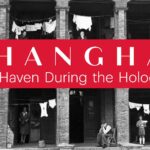 In this professional development workshop for educators, we will shed light on a lesser-known moment in Holocaust history: European Jews who had been shut out of country after country while trying to escape Nazi persecution found a beacon of hope in an unlikely place – Shanghai, China. Through artifacts and survivor testimony, teachers will explore the political circumstances in occupied-Europe that forced Jewish refugees to flee, why Shanghai became the destination of choice for Jews, and what life was like for those living in the so-called “Shanghai ghetto”.