Virtual Program: LGBTQ+ Life and Death under the Nazi State 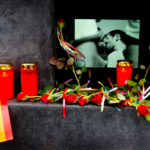 Explore how the Nazi state reacted to lesbians, bisexuals, and transgender people with a lively lecture presented by Laurie Marhoefer, a historian of queer and trans people, and Jon Bridgman, Endowed Associate Professor of History at the University of Washington. Alongside Nazi police files on gay men, Marhoefer will highlight real stories and experiences from trans women, Jewish lesbians, and women who were married to men and had affairs with women, challenging how we think of LGBTQ+ people as Holocaust victims. She will also discuss ways that race impacted cases where people were accused of sex and gender “crimes,” like “cross dressing” and “unnatural fornication.”

Rise Up: Stonewall and the LGBTQ Rights Movement was developed by the Newseum. The Newseum is an affiliate of the Freedom Forum, whose mission is to foster First Amendment freedoms for all.  freedomforum.org