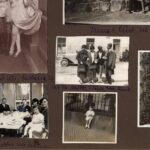 Join us as we commemorate the 84th anniversary of the “Night of Broken Glass” with a program of remembrance, reflection, and performance.

This powerful intergenerational commemoration features The Suitcase, a one-man show by Tim Lorsch, the first-born son of Jews who fled Nazi Germany in the late 1930s, blending narrative storytelling with music and archival video.

In 2016, a suitcase was found in a little antique store in the Czech Republic. It miraculously made its way to Tim Lorsch, a producer, session player, arranger and songwriter based in Nashville, Tennessee. The suitcase had the name of Tim’s great-uncle, “Julius Israel Lorsch,” inscribed inside.

Using looping technology to weave layered story through classical string instruments, The Suitcase tells the story of the Lorsch family and Tim’s discovery of their history, community, and survival.

The performance will be preceded by remarks from dignitaries, a candle-lighting ceremony featuring Survivors and descendants of Survivors, as well as memorial prayers with Cantor Roytman.

Reservations are required.  Free to the public.

Illinois Holocaust Museum & Education Center is a partner with the Jewish United Fund in serving our community.