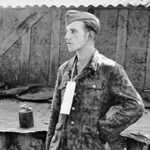 How did the Military Intelligence Division, a part of the Army with a history of antisemitism, racism, and anti-immigrant activity, become the part of the Army which specifically recognized the tactical and strategic value that recent immigrants, Jewish refugees from Nazism, Japanese Americans recruited straight out of internment camps, and other “marginal” soldiers could provide?

To teach these men and a handful of women how to do battlefield intelligence, the Army created the Military Intelligence Training Center at Camp Ritchie.  Its graduates went on to make exceptional contributions to the war effort, to postwar occupation governance, to war crimes prosecutions, and to the creation of the Cold War era world. Dr. Daniel Frey, Founding Director of the Center for Holocaust and Genocide Studies at the United Military Academy, will discuss Camp Ritchie’s history, its function, its graduates, and how their innovations are relevant to us today.