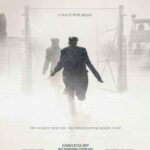 The Auschwitz Report, Slovakia’s 2020 Oscar submission for Best International Film, shares the true story of two Auschwitz prisoners who escaped and provided a rare firsthand report of genocide at the camp. Join us for a special “sneak peek” screening of this incredible film, which will only receive a limited cinema release outside of Illinois on September 23.

The film follows two Slovak Jews – Freddy and Walter – in Auschwitz as they compile a 32-page report about the situation inside the camp, managing to escape after two years of incarceration. Their report included the camp layout, construction details of the gas chambers and furnaces, and a label from a Zyklon B canister.

Freddy and Walter’s report has since become known as the Vrba-Wetzler Report, and despite its grueling journey out of the camp, it was the first detailed report which the Allies received and regarded as credible. The knowledge that the Vrba-Wetzler Report provided ultimately prevented the Hungarian government from deporting Jews to Auschwitz, saving more than 120,000 lives.