Occupation, Collaboration, and Resistance: The Holocaust in France 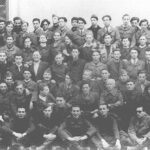 Occupied and divided, collaborationist yet defiant, France provides one of the most complex stories of WWII and the Holocaust. In this workshop, educators will examine primary sources and eyewitness testimony to unpack the unique complexities of France, including: the division of France into German-Occupied Zone and the unoccupied south, led by the officially neutral but deeply collaborationist Vichy Regime; La Résistance (or maquis), one of the largest and most diverse opposition movements in Western Europe; and the experiences and fate of French Jews and foreign Jews living in French territory.