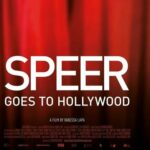 Grand winner of the Israeli Academy Awards and winner of three major awards at the Israeli Documentary Awards, Speer Goes to Hollywood presents the enigma of Albert Speer: the highest-ranking Nazi in Nuremberg who, despite his crimes, was spared the death sentence.

Speer was one of Hitler’s closest confidants and his chief architect, tasked with rebuilding Berlin as the capital of a global empire. Appointed Minister of Armaments and War production in 1942, Speer was responsible for 12 million slave laborers. And yet, even now, he has the reputation of being the “good Nazi” – a myth he carefully constructed himself.

Speer Goes to Hollywood is the film that Speer never made. Based on months of audio cassettes recorded by screenwriter Andrew Birkin, it features Speer’s callous attempt to whitewash his past in a feature film. The rare archival materials selected to illustrate his account offer us a chance to look beyond his words and ponder whether this eloquent but ultimately self-serving narcissist was recording history – or recording his story.

The screening will be followed by a Q&A with Director & Co-Producer, Vanessa Lapa, moderated by John Davis, Illinois Holocaust Museum Board of Directors. A wine and cheese reception will follow.

“Intriguing document, highlighting the ease with which the most reprehensible figures are able to whitewash their legacies.” – The New York Times

This program is proudly supported by the Israel Engagement Fund: A JCC Association of North America Program Accelerator.