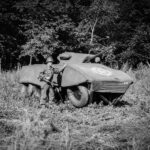 Beyer will open the program with a visual and audio presentation that will show how the Ghost Army deceived their enemies on the battlefield with tactical deception and explain why this extraordinary unit was awarded a Congressional Gold Medal, followed by a conversation with Bluestein about his firsthand experiences as a Ghost Army veteran.